I have spent a lot of time lately working on large C++ and Rust projects — for example, a failed attempt at correctly handling pending request state for HTML <img>.complete in Servo, and an attempt at implementing lh and rlh units in WebKit. Unsurprisingly, even the smallest changes to either of these projects takes a lot of compute to recompile, making development cycles slower than ideal. Any change to Servo was an ~8 minute recompile (the script module seems to be one of the more compute-intensive parts), and any change to WebKit was a 3-10 minute recompile depending on what I had touched.

Compilation is a function of computation over time. Since I can’t yet manipulate time, I’ll have to increase my compute — hence, a new PC build. Here’s what you can expect from the remainder of this post:

I don’t play graphically intensive games, so I transplanted the GTX 970 from the old build to the new rather than upgrading.

What difference does one case fan make?

I am running 5 case fans in this build — two X2 GP-12 120mm static voltage fans came with the Meshify C and are run as top exhausts, two 140mm Noctua PWM NF-A14s are run as front intake fans, and one 120mm PWM Noctua NF-F12 as a rear exhaust. This many fans is likely overkill…but at least I can be reasonably confident things will stay cool and quiet.

All of the parts in this build arrived within a week of when I ordered them, minus the 120mm rear exhaust NF-F12 which took roughly three weeks. I decided to initially build without it. It has finally arrived, so let’s do some temperature benchmarks before and after the introduction of this fan.

For these tests I’ll be using RealBench, since that stresses both the GPU and CPU in a “realistic” fashion, and Prime95, which focuses on CPU stress-testing. All of these tests were run with every PWM fan set to the “Silent” fan profile, as that is closer to what I would actually use (though I will be setting up custom fan profiles in the end). These tests were run within hours of each other, so ambient temperature outside the case should be roughly the same between each test.

RealBench in action. Note I ended up running these tests for a total of an hour. 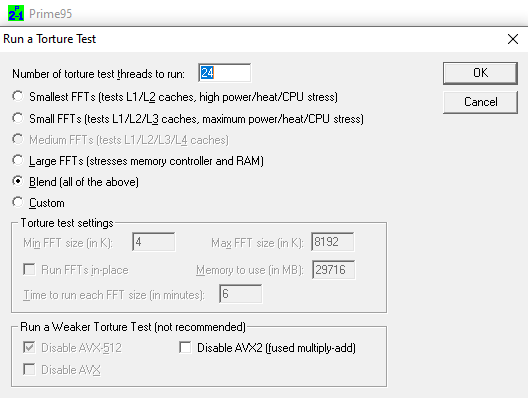 Given a 1-2°C margin of error, the results are roughly the same. In case you needed more confirmation that there are diminishing returns in adding more case fans, let me prove it again. I don’t think it’s a complete waste, as more fans should be able to cool a non-peak load system more quietly by all spinning at an inaudible base-level RPM.

For the following tests, I ran a clean build of WebKit with an empty ccache:

I’m sure there are lower-level caches that aren’t cleared running these back-to-back, but I’m okay with this not being an exact science.

WebKit recently gained the ability to effortlessly integrate with IceCC, a distributed compilation tool. Renting some cloud compute and taking IceCC out for a test run sounds like a fun experiment. Stay tuned!